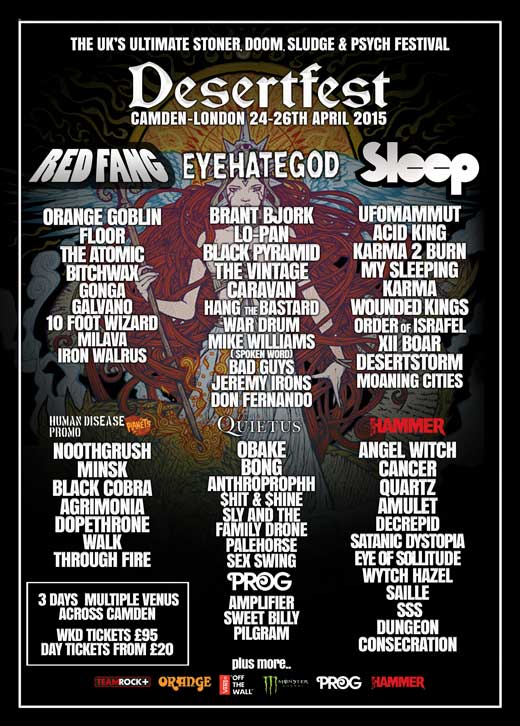 As we’re getting closer to the festival, it is finally time for us to announce individual day lineups for the 2015 edition of UK’s finest heavy and alternative event DESERTFEST LONDON. In the meantime, day tickets are now officially on sale via the festival’s networks.

FIND DAY SPLITS DETAILS HERE
DAY TICKETS / WEEKEND TICKETS
For the fourth year running, Camden will be hosting one of the most exciting stoner/doom/sludge/psych gatherings in Europe, for a full weekend of fuzzed-out tunes, heaviness and partying in very friendly atmosphere. This April, not only it will see the addition of a brand new Prog Stage, but the festival will also expand from three to six venues across Camden: Koko’s, The Electric Ballroom, The Underworld, Black Heart, Jazz Café and Purple Turtle.
Stoner rock pioneers SLEEP will treat the crowd to the finest smoked-out odysseys, with an exclusive headlining set at Koko’s on Sunday, while on Friday, Portland’s favorites RED FANG will prove to be the best partystarter anyone has ever dreamt of for the festival. On the apex of this weekend, the one and only sludge godfathers EYEHATEGOD fronted by the mighty Mike IX Williams will show us who the bosses are, while BRANT BJORK AND THE LOW DESERT PUNK BAND will make groove gauges explode in support of his new record « Black Power Flower ». Not to mention UK’s heavyweights ORANGE GOBLIN, who are set to make Camden’s ground tremble with their fiery heavy metal anthems, for a one-off 20th anniversary performance.
With more than 60 bands on the bill, this fourth DESERTFEST LONDON promises to be yet another memorable weekend for all heavy music fans out there.
DESERTFEST LONDON 2015
24-26th April in Camden Town
More infos at www.thedesertfest.com
Find the festival on Facebook, Twitter and Instagram 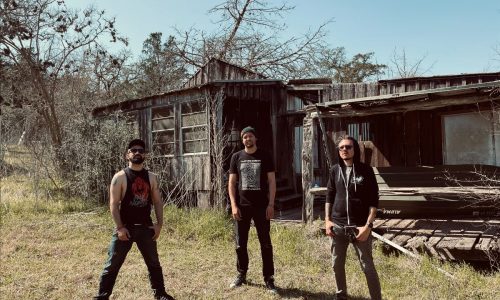