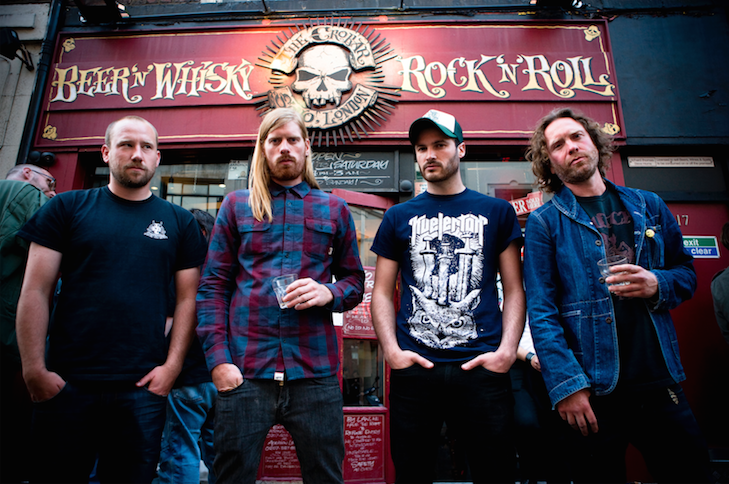 Within four years, STEAK have established themselves as one of the British stoner rock scene’s most satisfying acts. Following the sandy steps of their American elders Fu Manchu or Kyuss, STEAK’s enthusiastic stoner rock sound is driven by ballsy riffs and contagious grooves, sparingly tinged with moments of pure cosmic escapism.As their sexy name suggests, this London-based foursome is far from sticking to the genre’s clichés, for they rather exploit sci-fi and comics imagery (all artworks were made by DC Comics artist Eduardo Ferigato) to illustrate the fuzzed-out sandy rock tornado they’ve been blasting for two years now.

After their two critically acclaimed EPs « Disastronaught » and « Corned Beef Colossus« , and a serie of successful gigs across Spain, France, Switzerland and the UK, the fuzzy foursome flew out to Palm Springs’ very own Thunder Underground studio this winter to record their first full-length « Slab City », due out in September via Napalm Records. The album was produced by Harper Hug (Vista Chino, Brant Bjork, Nick Oliveri) and co-produced by Unida’s guitarist Arthur Seay, and will feature guest vocals from desert rock legend John Garcia.

« It should come as no surprise that STEAK’s thudding, heavy-as-balls desert rock is decidedly meaty. » Metal Hammer

« Steak have that Midas touch in writing kickass Stoner Rock tracks that will have you entertained from start to finish. » The Sludgelord

« Corned Beef Colossus excellently balances tonal weight and motion of groove (…), and affirms the band as one of the British heavy rock scene’s most satisfying acts. » The Obelisk