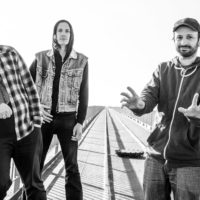 Beyond a highly recognizable sound imprint, MARS RED SKY craft their own otherworldly atmospheres. The trio has been entrancing crowds for a decade now, with their eponymous debut coming out in 2011, following a recording session in Spain’s mystic Bardenas desert. Whether you listen to the albums or experience their music on stage, their hulking yet trippy brand of stoner rock will take you on an infinite journey. From the beginning, the Bordelais trio becomes a major live act, leading them to play the biggest rock and metal stages (SXSW, Hellfest 2014 and 2017, Desertfest London and Berlin, Roadburn, Eurockéennes) and open for the likes of Sleep, Dinosaur Jr., Kyuss Lives!, Killing Joke, Gojira…

With their sophomore full-length « Stranded In Arcadia » (Listenable 2014), a sci-fi odyssey filled with utopian reveries, MARS RED SKY establish themselves as a cornerstone band of the heavy psych scene, garnering praise from major international critics. « Hypnotic », « massive », « charismatic », « psychedelic » are some of the tags used to define the prolific trio’s brand of sound, floating atop the stoner rock constellation and 70s psych-pop nebula. Two years and hundreds of shows across Europe and Americas later, the band releases their third album « Apex III (Praise For The Burning Soul) ». Once again produced by Brazilian engineer Gabriel Zander, the sound is hulking as ever, with Julien Pras ethereal vocals opening a door on even more enchanting paths.

In 2017, MARS RED SKY treat us to an absolute collector’s item, with « Myramyd » limited edition 12’’ EP – an instrumental odyssey in the form of a 17-minute live recording, on which only the most zealous fans have the ability to lend an ear. The song gets performed at the band’s second Hellfest appearance a few weeks after the release. With an insatiable appetite for the stage that keeps them travelling across lands and continents to test their creations, MRS will return in the spring and summer 2018 with a batch of live shows, including appearances at Freak Valley Festival (DE) and Resurrection Festival (SP). Now wait for the next treasure to be unearthed…

« What is overwhelming is the spacey, desert-cruise-as-daylight-is-waning type calming, soothing and frankly awesome feeling the band tosses your way. » Doommantia

« When this Bordeaux-trio embrace me with their mix of desert rock, psych, groove and 60’s rock, they are heading for unchartered territory. (…) Mars Red Sky takes us out into other galaxies. » – The Sludgelord

« This is for the majority a breath of fresh air within stoner rock, the French trio delivering a welcome tonic to those who say the scene has died and moved on, and more pertinently to a genre needing this kind of passion, invention and good tunes. Great stuff. » – Nine Hertz

« This album is more than a kick ass rehash of familiar 70’s influences; this French three piece comes dangerously close to classic album territory, with a sound that’s equally melodic and menacing, brutal and beautifully serene, and this reconciliation of polarities is the driving force behind their particular brand of psychedelia. » – The Sleeping Shaman
« I have no doubt that when the end of 2014 arrives, Stranded in Arcadia will be counted as one of its most substantive milestones. » – The Obelisk