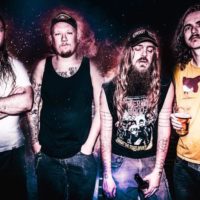 Not ones to sit idly, GURT have released two albums and seven EPs and splits. They are known to make some unconventional choices for cover songs by metal bands (‘Baggy Trousers’ by Madness, ‘Psycho Killer’ by Talking Heads) and have also ruined two beloved Christmas songs. 2014 was a momentous year for the band: it saw the release of their debut album ‘Horrendosaurus’, along with a three week European tour with Dopethrone as well as an outstanding first appearance at Bloodstock Open Air Festival. In 2017, GURT released their second full-length record ‘Skullossus’; to high praise from fans and critics. In true GURT style, ‘Skullossus’ is an absolute colossal record that raises the bar for their unique form of ’Party Doom’. This collection of 11 tracks perfectly encapsulates how they differ from every other band on the current UK DIY scene! Created over a week-long period at Titan Studios in Watford under the watchful eye of producer Steve Sears and co-producer Tony Nigelson, these songs feature big riffs, memorable hooks, massive choruses and some special guests!

GURT are now driving straight ahead into 2018, already planning the next records to keep getting out on the road to ever new places, including another European tour in the summer.