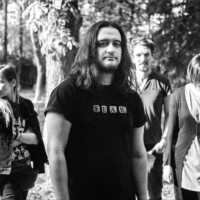 Initially founded as a solo project of guitarist Igor Sydorenko (Stoned Jesus, Voida, Arlekin), KROBAK’s early releases were inspired by the likes of Godspeed You! Black Emperor, Yndi Halda and Mono. Encapsulated in « The Diary Of The Missed One » (Cardiowave, 2008) which is Ukraine’s first officially released post-rock album, this era ends around late 2009 when Igor decides to focus on Stoned Jesus.

In 2012, a new lineup emerges with Asya on bass, Natasha on drums and Marko on violin. Another full-length comes out, « Little Victories » (MALS, 2013), along with a string of European and Ukrainian dates to follow (including shows with Samsara Blues Experiment, Alcest, Maybeshewill). A wider scope of influences – Swans, The Mars Volta and King Crimson being the pivotal ones – helps the band develop their distinctive brand of instrumental soundscapes further.

This autumn will see the release of their new album « Nightbound », recorded and mixed at Lipky Zvukozapys, Kyiv. KROBAK’s third full-length album is filled with passion, tension and violins… More violins, please!