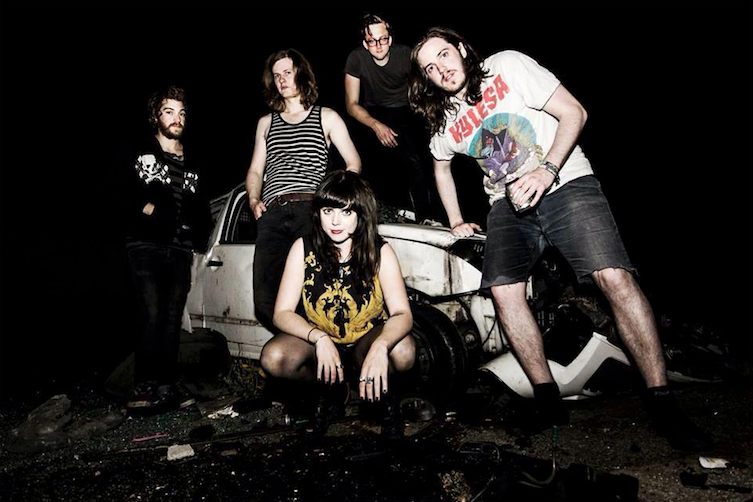 Formed in Leeds in 2010, BLACK MOTH have quickly established themselves as one of the most exciting underground acts in the UK. Fronted by magnetic vocalist Harriet Bevan, this young and talented quintet was defined as « Electric Wizard meeting Band Of Skulls in a dungeon » by Terrorizer. The release in 2012 of their fiery debut record « The Killing Jar » – a grunge-goth odyssey sprinkled with a variety of influences going from Sabbath to the Melvins, The Stooges to L7 – and their mesmerizing on-stage presence, led them to share the stages with the likes of Uncle Acid & the Deadbeats, Red Fang or Turbowolf. They were also invited to play great festivals such as Desertfest London, Download Festival or Reading festival.
BLACK MOTH’s long-awaited second full-length was produced by Jim Sclavunos (Nick Cave & The Bad Seeds, The Cramps, Grinderman) and recorded by legendary Leeds engineer Andy Hawkins. « Condemned To Hope » is an album of fearsome drive and clandestine twists, skilfully sidestepping the cliché and heavy-handedness of delivery that often seems fit to destroy contemporary heavy rock ‘n’ roll from the inside out.

« Black Moth draw you in with sensual tones and whisper words of horror into your welcoming embrace. » Metal Hammer
« Condemned To Hope is a surreal, weird, dark and twisted musical odyssey that Black Moth should rightly be proud of. » The Sludgelord
« Combining huge dark riffing with stoner hooks, this is British metal at its finest. » Metalmouth
« A doomy, raucous, heavy rock album that just begs to be put on repeat. » Ride With The Devil
« Quite possibly one of the best stoner rock albums of this year. » Music & Riots